The Vatican welcomes the Choir of the Holy Trinity Cathedral of Tbilisi, Georgia, to a special concert in the Sistine Chapel on 26 June, 2022, and to sing the Catholicos Patriarch Ilia II’s Ave Maria in St. Peter’s Basilica on 29 June, the Liturgical Solemnity of St. Peter and Paul, in the presence of Pope Francis and a visiting Delegation of the Orthodox Ecumenical Patriarchate of Constantinople.

The initiative began taking form back on the 30 November 2019, when Pope Francis wrote a letter to His Holiness and Beatitude Ilia II, Catholicos and Patriarch of All Georgia, proposing a gathering in the Vatican to celebrate forty years since the Patriarch’s historic visit in 1980.  The Patriarch was the “foremost diplomate” for Georgian independence on the world stage.  In his letter, Pope Francis proposed a musical celebration with the participation of the Holy Trinity Cathedral Patriarchal Choir that would showcase the Patriarch’s compositions and Georgian music at the Vatican. 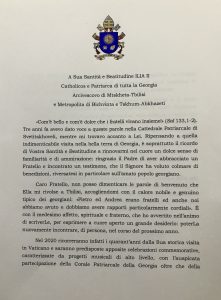 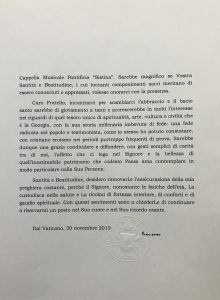 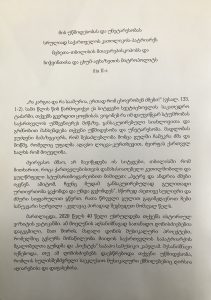 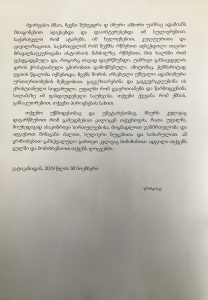 Pope Francis’ letter was well received by His Holiness Ilia II on 18 December, 2019, when H.E. José A. Bettencourt, the Apostolic Nuncio to Georgia, H.E. Giuseppe Pasotto, Administrator of the Apostolic Administration of the Caucasus of the Latins, and Msgr. Giuseppe Laterza, Minister-Counselor of the Apostolic Nunciature, presented the Pontifical letter. Two weeks later, on the 29 December, 2019, His Eminence Pietro Parolin, Cardinal Secretary of State, personally renewed Pope Francis’ invitation when he officially visited Georgia. His Holiness Ilia II and the Eminent Synod received Cardinal Parolin with the highest honours at the Patriarchal Palace in Tbilisi. 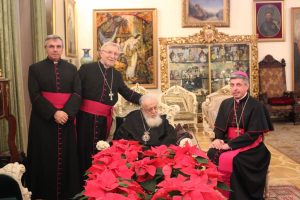 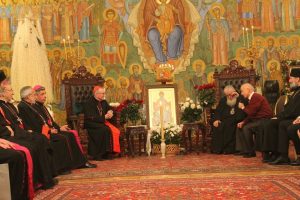 During the 2022 Easter Season, with the traditional exchange of Easter greetings between His Holiness Ilia II and Pope Francis, the Catholicos Patriarch of All of Georgia responded to Pope Francis’ letter signaling that the Holy Trinity Cathedral Choir would sing in the Vatican.

The Georgian hymns presented in the Vatican represent the centuries-old faith and prayers of the noble Georgian Nation, steeped in the faith and in the beauty of Tradition, rising from the depths of the human soul and reverberate to unite with the Transcendent.  They are rooted in the faith of the early Christian communities of the III and IV centuries, in their devotion to the Blessed Virgin Mary, the spirituality of the Desert Fathers, Saints and Martyrs.

Thanks to the support of various segments of Georgian Society and Government alike, the initiative is a momentous and historical manifestation, at a time when the world is in the grips of the ravages of war in Ukraine, so close to Georgia’s experience, and where the plight of many of Georgia’s displaced sons and daughters is still a very deep and painful wound.

It is hoped that the Holy Trinity Cathedral Choir’s hymns will add to the mutual appreciation of Traditions, foster closer fraternity between Peoples and Churches, and rise as a prayer for peace in our world. 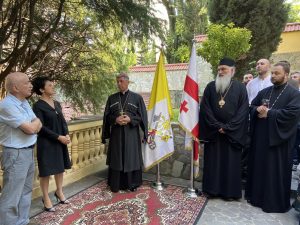 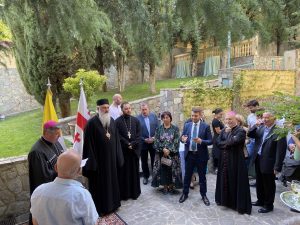 Prev PostInterfaith Prayer for the Peace in Ukraine