On 9-10 November 2019, at the invitation of S.E. Mr. Zohrab Mnatsakanyan, Minister of Foreign Affairs of the Republic of Armenia, H.E. Msgr. Paul Richard Gallagher, Secretary for Relations with States, visited to the country. On the morning of Saturday 9 November, the Secretary for Relations with States, accompanied by Msgr. Visvaldas Kulbokas, Official of the Section for Relations with States, arrived at the “Zvartnots” International Airport in Yerevan. Mr. Tigran Samvelian, Director of the European Department of the Ministry of Foreign Affairs, H.E. Mr. Garen Nazaryan, Ambassador to the Holy See, and Mr. Harutyun Vardanyan, Official of the State Protocol Service greeted the guest upon his arrival. Also present at the airport were the Apostolic Nuncio, H.E. José Bettencourt, and the Councilor of the Apostolic Nunciature, Msgr. Giuseppe Laterza. That very morning H.E. Gallagher was received by H.E. Mr. Nikol Pashinyan, Prime Minister, who was accompanied by the Minister of Foreign Affairs and Government officials. During the conversation, both sides expressed their satisfaction with bilateral relations, and discussed prospects for furthering cooperation, as well as the various aspects of the life of the Catholic Church in Armenia. The Head of the Armenian Government asked to convey to the Pope Francis gratitude for the Apostolic Journey in June 2016 and his continued attention in regards to Armenia. Subsequently, the Secretary for Relations with States rendered tribute at the Memorial dedicated to the Victims of the Armenian Genocide.  There he paused in prayer and laid a wreath of flowers. He was accompanied during this segment of the visit by H.E. Mr Avet Adonts, Deputy Minister of Foreign Affairs, on behalf of the Armenian Government. H.E. Archbishop Raphael Minassian, Ordinary for the Armenian Catholics of Eastern Europe was also present. At the adjacent museum Archbishop Gallagher was guided through a visit by the deputy director of the museum who explained the historical and political context of the Armenian massacre. At the conclusion of the visit, the Secretary for Relations with States signed the Guest Book, ensuring his prayer for the victims of the atrocious tragedy and hoping that, with the grace of the merciful God, human relations be restored and inspired by justice and mutual respect. At midday, S.E. Gallagher had a working session with H.E. Zohrab Mnatsakanyan, Minister of Foreign Affairs. During the meeting, both sides discussed issues relating to bilateral relations, regional and the international situation.  The meeting was followed by press statements by both the Armenian Minister of Foreign Affairs and the Secretary for Relations with the States of the Holy See. This was followed by a luncheon offered by H.E. Mr. Mnatsakanyan in honor of H.E. Gallagher and the Delegation of the Holy See. In the early afternoon, the Secretary for Relations with States was received by H.E. Mr. Armen Sarkissian, President of the Republic. During the interview, the Armenian Head of State thanked the Guest for the visit and Pope Francis’ gestures of friendship for Armenia.  The parties discussed various aspects of the life of the country and focused on concrete issues of bilateral cooperation. Subsequently, S.E. Gallagher went to Holy Etchmiadzin for a courtesy visit with His Holiness Karekin II, Supreme Patriarch and Catholicos of the Armenians. During the meeting, the Catholicos was accompanied by H.E. Archbishop Nathan Hovhanissyan, President of the Department for External Relations of the Armenian Apostolic Church, by H.E. Archbishop Khajag Barsamian, Delegate for Western Europe and Personal Representative in Rome, as well as by the Proto- Archimandrite the Most Reverend Shahe Ananyan, Director of the Department for Inter-Ecclesial Relations of the Armenian Apostolic Church. The Secretary for Relations with States conveyed the cordial greetings of Pope Francis to His Holiness Karekin II.  The Catholicos reciprocated with expressions of esteem and gratitude. Various aspects concerning dialogue and cooperation between the Catholic Church and the Armenian Apostolic Church were touched upon.  Expressions of satisfaction were conveyed for the existing fraternal relations between the two Churches. On the evening of 9 November, the Secretary for Relations with States visited the residence of H.E. Msgr. Raphael Minassian, Ordinary for the Armenian Catholics of Eastern Europe, in Yerevan, where he met a group of priests and students from the seminary of the Ordinariate, as well as those of the Mechitarist Order. Holy Mass was celebrated in the residence chapel followed by a dinner in honour of the guest. On the morning of Sunday, 10 November, H.E. Gallagher travelled to Gyumri for a Eucharistic celebration with the local Armenian-Catholic community. The Holy Mass was presided over by H.E. Msgr. Raphael Minassian, in the Armenian rite. During the celebration, the Secretary for Relations with States gave a homily, in which he conveyed Pope Francis’ greeting to the Catholics of Armenia. Drawing inspiration from the Sunday liturgical texts, he encouraged the faithful to face the challenges of daily life with courage and trust in the Lord and to bear witness to the joy of the Gospel. In the afternoon of the same day, H.E. Archbishop Gallagher concluded his visit to the country and returning to Rome. 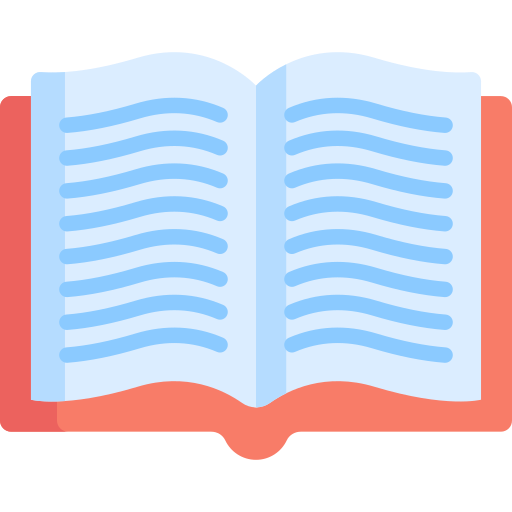 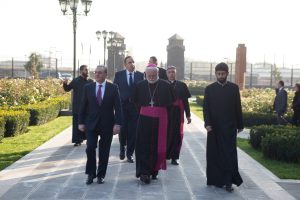 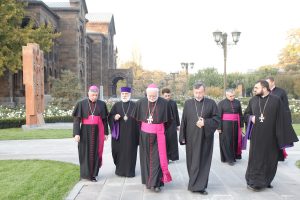 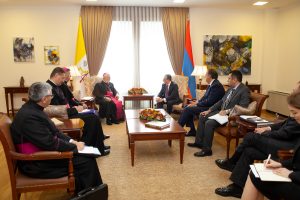 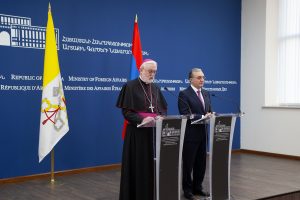 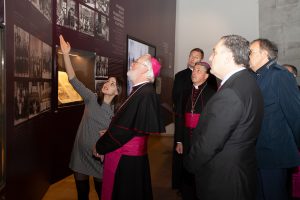 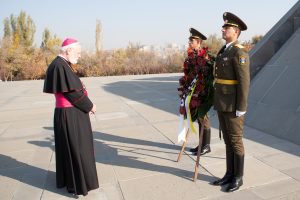 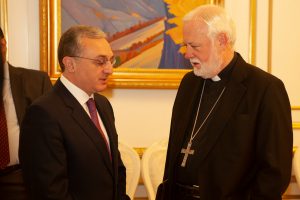 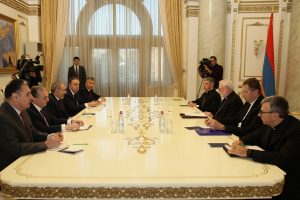 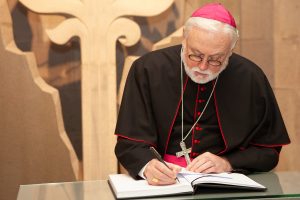 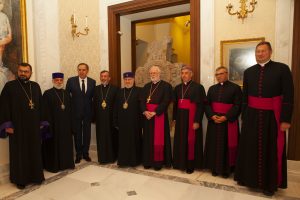 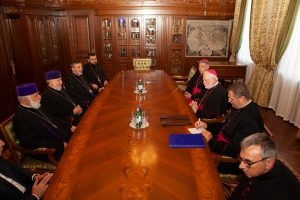